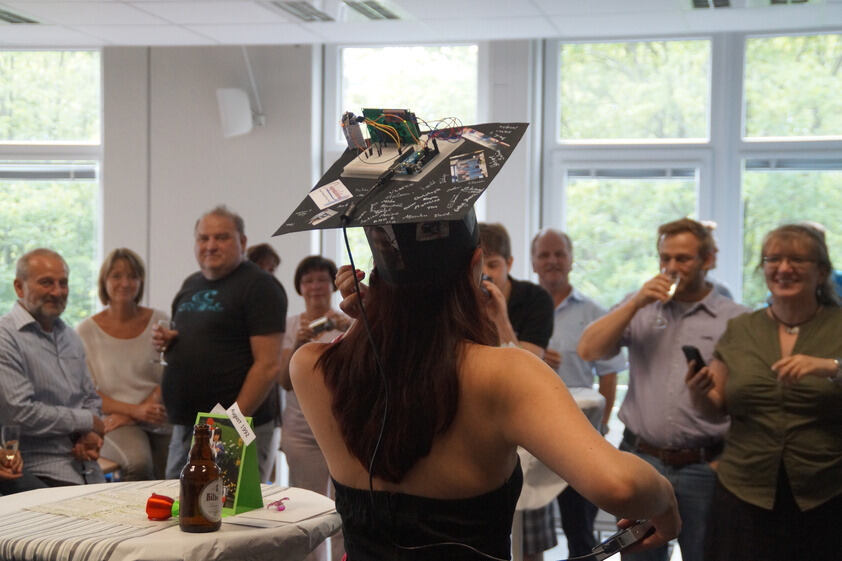 IT systems have an ever-growing impact on society and economy. Thus, the job market situation for IT specialists is extremely positive, yet the number of students in the IT sector is far too small to meet the current and increasing demand. What might the problem be? What makes these jobs - especially for young women - unattractive? How can this situation be addressed?

This dissertation has investigated these and correlating questions. For this purpose, the image that children and adolescents have of computer science and computer scientists has been analyzed. In contrast to this is the image which the computer science community aspires to have. One way to inspire more young people about computer science and in doing so, win them as a potential young academics, is to build a Schülerlabor for computer science, that is an extracurricular learning lab for students. The choice of placing this learning facility outside of school was based, among other things, on the fact that computer science as a subject in school is still overlooked in many German states, especially in North Rhine-Westphalia, where this work was performed.

This thesis details the design, construction, development, as well as a qualitative and quantitative evaluation of InfoSphere, the learning lab for computer science at RWTH Aachen University, which has been welcoming 4,122 students since it was founded in June 2010. Secondly, an evaluation of 1,349 records from students on the topic of the image of computer science has been performed, which, as an expansion of previous work, examines children and adolescents from the 3rd grade level up to high school graduates.

The conception of the student lab included decisions on equipment and the use of media and materials to promote learning, and primarily the instructional design of currently 27 computer science workshops for various topics and different ages. The pedagogical emphasis lies on learner-centered activities, so that children and adolescents discover computer science autonomously. Furthermore, the workshops promote the often under-perceived aspects of computer science such as creativity, teamwork, and its impact on everyday life. The concept of the Schülerlabor was evaluated on the feedback from teachers as well as didactics experts and moreover, was evaluated by 354 students’ records in greater depth, over the period from January 2011 to October 2012.

The mainly quantitative evaluation with regard to the students' conceptions about the discipline as well as the world of work by computer scientists was implemented by means of an online-based pre-post-test design. After some questions were asked about the image of computer science in the first period, the following questionnaires were then fully geared to address the issue of "students' conceptions about computer science" in November 2012. In the second period - from November 2012 to December 2013 - 116 complete records of primary school children, and 879 responses from students of lower and upper secondary were evaluated. Measurements were made in a pre-test on the prevailing image of computer science, as well as in a post-test on the changes arising from a visit to the InfoSphere, in particular the effect of various modules.

Overall, interesting differences were found between the sexes, in terms of both expectations for the visit to InfoSphere, and in terms of their ideas about the computer science discipline and IT professionals. For example, girls see the technical aspects of computer science in the foreground more than their male peers. This statement, coupled with the fact that girls especially feel that the technical aspects are of little interest, can already be seen as a factor contributing to the low number of women interested in computer science. These and other exciting results are statistically analyzed in detail as part of this dissertation. In this work, the different instructional designs and thematic orientation of the workshops are put in relation to the measured changes in thinking in children and adolescents. In the outlook, many ideas for the development of the learning lab can be found, as well as the expansion of the research in the context of the student’s perception of computer science.

Thesis and data of the studies are availbale for download at RWTH publications.